The name Livingston literally means “Living’s town”. The first surviving record of the name is in the Latin form ‘villa Leving’  which appears in a twelfth century charter. Who he was is not known but the name is Anglo-Saxon in origin and the family may have settled here during one of the various Northumbrian expansions into the Lothian area. If this is the case, then the earliest church and settlement may date back to the tenth or eleventh century.

Leving was succeeded by his son Thurstan and he, in turn, by his son Alexander. The Livingstones of that ilk continued to hold the land for many generations. The family seat was the Peel of Livingston. Its site still survives among trees about half a mile to the west of the Kirk.

The earliest surviving records of a church at Livingston are from the second quarter of the twelfth century. The parish was part of the Diocese of St Andrews but c 1128-30 the income and control of the church was, with the blessing of both the bishop and the king, David, given by Leving to the canons of the newly founded abbey of Holyrood. During the thirteenth century the church had both parson and vicar. The parsonage stayed within the benefice of Holyrood but c 1510 the vicarage became annexed to the provosty of the collegiate church of St Mary in the Field. At the Reformation, the vicar was Mr Alexander Forrest. In the following decade there were several incumbents and in 1570, John Clapperton became the first minister.

The ‘Holyrood Charters’ contains the earliest references to a church in Livingston. Number 2 in ‘Early Scottish Charters’ states:

‘Robert, Bishop of St Andrews, addressing all the sons of the Holy Mother Church, gives his Episcopal blessing and announces that he, with the assent of his chapter, confirmed all the grants which King David made in alms to the Church of Holyrood, namely the church of the castle with a willow plantation; the church of St Cuthbert, the church of Crostorfin (sic) with two bovates and six acres; the church of Erith and two ploughgates and a saltpan with twenty seven acres; the church of Livingston with half a ploughgate’ the church of Hamere and Hamera and Forda; also Broctuna and Inverlet and Petendra with a general confirmation of everything which the King gave. Reserving the dignity and rights of the bishopric’

The last name on this document is ‘Turstano filio Levingi’  ie Turstan son of Leving, the family from whom Livingston takes its name.

Number ten in the same book is smaller and is a grant by the same Robert to the canons of Holyrood of the church of the ‘vill’ of Leving:

‘Robert,  Bishop of St Andrews, announces that he has confirmed to the abott and canons of Holyrood the grant which Leving made of the church of his ‘vill’, saving the rights of the see of St Andrews.’

The Communion cups which are still in use, are dated 1696 and have the legend ‘Given by Patrick Murray of Eliburn to the Kirk of Livingstoun’. Patrick Murray was the founder of the Royal Botanic Garden in Edinburgh. The church also has in its possession, the original cases in which these cups were kept when not in use. There is a ring on the top of each which may have been to suspend them from the saddle when in transit.

The rectangular plan of the present building may well have been derived from that of its medieval predecessor. It is likely that the material from the previous church is  incorporated in the rubble of the present church.

The building’s orientation follows the medieval practice as do the plain gables (this is an assumption in the case of the west gable which at present is harled). The congregational entrances in the south wall also reflect the medieval tradition, as do the general proportions of the church’s plan with the eastern third of the church, originally the chancel being taken up by a loft and chambers (see below).

Despite the basic conformity to the plan of a rectangular medieval church, no part of the existing building can be positively identified as medieval. Rather, the existing architecture and layout are very much that of the post-Reformation period in which the east-facing tradition of worship was replaced by preaching and communion being conducted from within the congregation. Thus the pulpit is situated in the body against the south wall with pews facing it from all directions with additional accommodation in the lofts at the east and west ends. In the south wall on either side of the pulpit, are two large round arched windows located below the north and south eaves which light the two lofts.

All of these windows in this and the northern wall, deserve some attention. The wedge-shaped ‘voussoir’ stones which form the arches of these small windows, are cut from a light grey stone, quite different from that used in the lower parts of these windows and in the larger arched windows. These smaller arches are in fact, later insertions. The original form of the windows can be seen in the blocked-in rectangular window directly above the modern south-eastern door. This rectangular window would have partnered its eastern neighbour which has not only had its upper lintel replaced with one of the new arches, but the lower portion of the window has also been built up.

From this description, it will be noted that most of the alterations have taken place at the east end of the building. It is here that the ‘laird’s loft’ and chambers would have been located. There would have been less accommodation in the loft than there is today. It would have been comparable with the loft at the west end, known as the ‘common loft’ which was available for general use.

The only inscribed date is on the sill stone of one of the large windows in the south wall, this says ‘REBUILT 1732’. Examination of the accounts in the records of Linlithgow Presbytery, make it clear that what took place was actually the major repair and limited rebuilding of the church walls, roof and kirkyard dykes. The total expenditure was £200 sterling which, though not inconsiderable, would have been wholly inadequate for a complete rebuilding. The appearance of the church must, however, have been considerably altered and the money was made to go further by allowing the tradesmen to re-use material from the old church. The roof slates alone were judged to be useless. From the estimate, it is clear that the common, ie west loft, was to be reconstructed and there is mention too of a baptism room, presumably situated in the laird’s lower chambers at the east end.

There is difficulty in identifying other structural changes. No mention is made of any alterations to the laird’s loft and upper chambers. There is also some doubt that the minister’s door in the centre of the south wall was blocked up during this work as the position of the inscription would suggest. As late as 1809, there is mention in the Heritors’ records of new locks being purchased for the eastern, western and centre doors of the kirk. This centre door may in fact, not have been blocked until 1837 when safer window lintels were inserted, or 1846, when there is mention of changes to the church entrance. The grey stone round arches of the smaller windows may also date to the mid-nineteenth century because in the 1849 plans of new galleries, the windows on the north side are shown as  lintel led rather than arched. In 1860, the present Georgian design of window frames was completed by a gift from the then Earl of Rosebery.

It is clear from both structural remains and documentary sources that, in spite of the many architectural changes and repairs, the bulk of the fabric of the building must pre-date even the 1732 rebuilding date. How much earlier the date should be is, unfortunately, difficult to state. Presbytery of Linlithgow records would normally show any such building work. There are references to repair but not to reconstruction during the course of the seventeenth century. The absence of any mention of a substantial building programme would therefore, possibly suggest that the main fabric of the church predates the start of the records in 1610.

OTHER FEATURES AND FITTINGS OF THE KIRK AND KIRKYARD

The Belfry is on the west gable and is of the ‘bird cage’ type – a simple rectangular structure with a pyramidal top and a ball finial on top of which there was originally a simple iron cross. The structure is somewhat unusual in that there is a flue in the gable for the bell rope. The bell itself was replaced in 1733.

This is a fine hexagonal example of late Gothic revival woodwork. Its sounding board has well constructed pinnacles and there is a fine stair with delicate wrought iron balusters. On the pulpit there is a well-designed wrought ion bracket which would have contained either a silver or pewter baptismal basin.

In the Kirk yard there are a number of fine late seventeenth and eighteenth century head and table stones. Among the best are, to the south of the kirk, the broad headstone of Thomas Graham, farmer at Seafield, who died in 1769 and a plain table top to Patrick Mill, died 1676. To the east of the building is the headstone of Patrick Clarkson’s children, died 1799.

This is the name given locally to a pair of curious stone pillars which have a  quincunx pattern of five holes drilled in their flat surfaces. Wooden or iron crosses may have been set in these holes and the whole may then have provided kirkyard markers  and a place where the guilty  could make public penance before being re-admitted to the church.

The building to the south of the kirkyard is the former manse, replacing an eighteenth century building which, after a series of increasingly costly and serious repairs, was declared unfit for occupation in 1802. This building was sold in 1994 and the new manse built in part of its garden. It is now a private dwelling house. 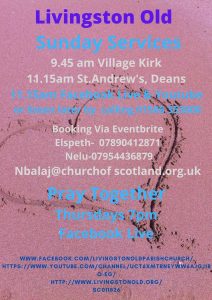 This Week at Livingston Old Parish

As restrictions ease, we are now able to welcome greater numbers to our Sunday worship services.

Craft Group: 10 am at the Village Kirk, Livingston Village.

Coffee at the Kirk: 10.30 am at the Village Kirk, Livingston Village

Sunday Worship: 9.45am at the Village Kirk, Livingston Village.

In these difficult times we don't want anyone to feel isolated or alone, especially those who are vulnerable.  Please contact the minister on 07954 436879 if required or leave  a message here.

Theme by Anders Norén — Up ↑